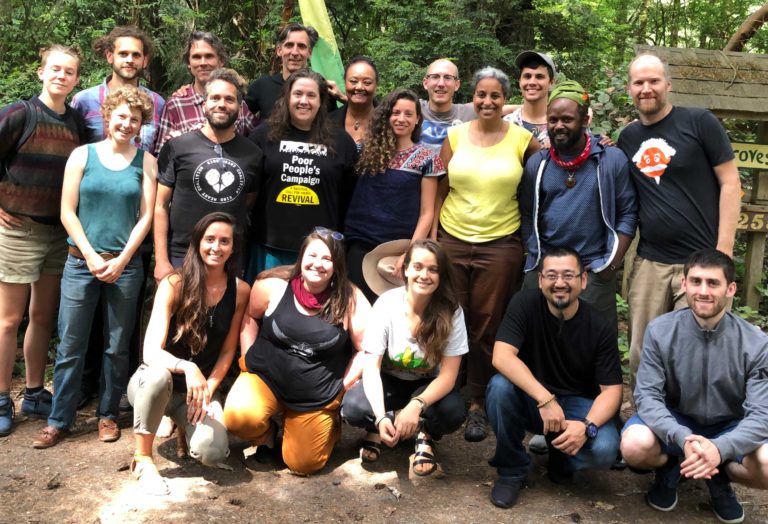 Phew…. It’s been close to a week since coming back from the Fierce Vulnerability conference at Seabeck, and I feel like I’m just now catching my breath (before taking off for Boston tomorrow!). What a time.

As many of you know, I started facilitating workshops almost 20 years ago, and have been doing so full-time since 2012. Last weekend was one of my proudest moments yet in my life as a trainer. 19 trainers and over 190 participants. I was so proud of the work that we all – all 200 of us – did over that weekend.

If you haven’t heard the backstory yet, we received a call from our friends at the Fellowship of Reconciliation (FOR) almost a year ago. FOR’s Northwest Regional Council has had an annual conference at Seabeck, WA for 61 consecutive years! This year, they wanted to do something different. Instead of a traditional conference with multiple workshops and a keynote speaker, they wanted to partner with East Point Peace Academy to organize a single themed workshop: Fierce Vulnerability.

Fierce Vulnerability is our newest workshop, something that has taken on a life of its own since we launched it last November. We have had long waiting lists for each workshop we’ve done, and requests from all over the country for it. While we are still beginning to understand what Fierce Vulnerability means to us ourselves, we do know that the way we are discussing it is resonating with many people around the country. 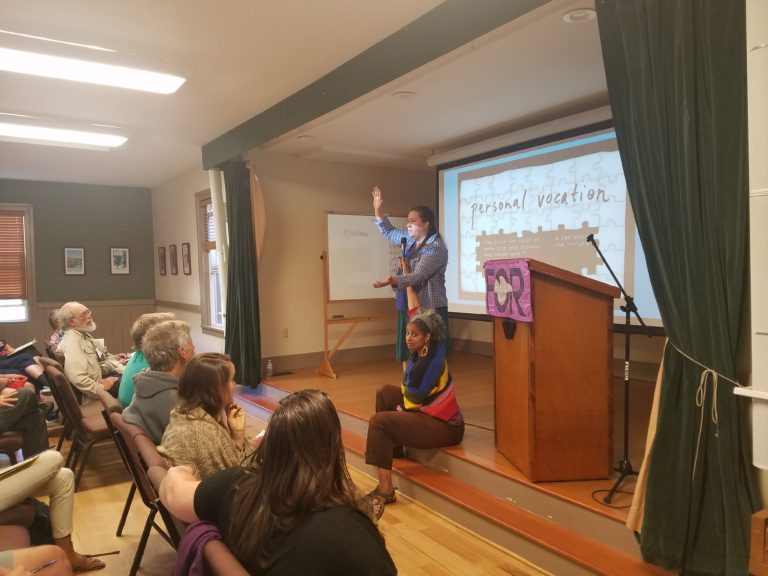 Fierce Vulnerability is about trying to build a powerful, direct action movement that has the fierceness to shut down highways and the vulnerability to open up our hearts. It is about acknowledging that we need to escalate our tactics in order match the escalated levels of violence that we are witnessing across society, but doubling down on our commitment to hold the dignity of all people. It is about reclaiming the militancy of nonviolence, while knowing that for us, the work of resistance is about healing our traumas and repairing our relationships.

With this in mind, our incredible team of 19 trainers from East Point as well as the Yet-To-Be-Named Network spent two days in Bainbridge Island preparing ourselves, and introduced this concept to close to 200 participants over three-days.

This was my third time presenting at Seabeck, and one of the most incredible things is hearing stories from elders who have not only been active longer than I’ve been alive, but many who have been coming to the same conference every year for that long. This was why it was such an honor to hear from so many that this was the best Seabeck conference they’ve attended yet. 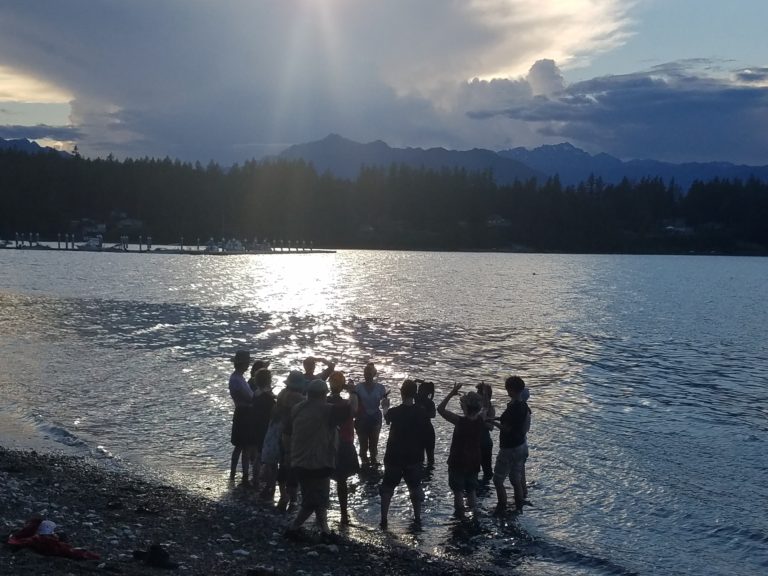 Gordon Glick, a longtime participant, wrote “the training session I just completed at the Seabeck Conference was the best sustained immersion in nonviolent civil disobedience I have ever attended; I’ll be 66 in a couple of weeks.”

Lisa Kaufman, another participant shared similar thoughts; “The conference really was one of the best experiences of my life.

“I’ve never experienced better leadership. It was clear they had figured something out about working together in a cooperative, supportive way. How they were with each other was a rare and outstanding model.

“I loved what the Peace Academy and yet-to-be-named network have figured out about direct action. The ideas the team shared were fresh, deep, and intelligent. And the way they shared them communicated that we didn’t need to pretend to be ahead of where we were. That made it possible to move forward.”

We had our ups and downs like any workshop, but our team responded well to all of them, and we were able to create a safe enough container for so many people to open up their hearts, share their tears, and envision a powerful, militant and loving movement of direct action.

In an activist culture that so often relies on “calling people out” to deal with conflicts, we were able to respond to a conflict that emerged at the conference in what I thought was a deeply loving way – a way that brought us closer together and that resulted in some important lessons and a commitment to do better. 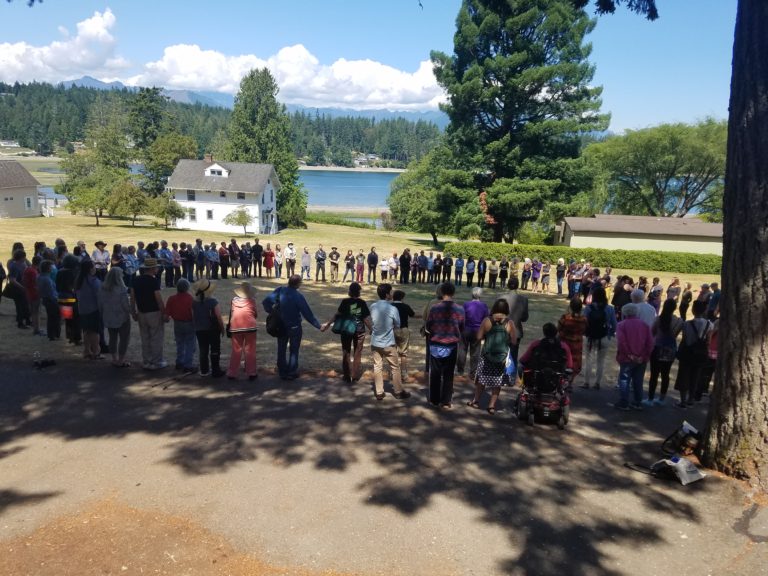 As one of our trainers, Nathan Kleban said, “It was amazing to not just talk about fierce vulnerability, but also to practice and see it in action. My heart glows when conflict serves to bring us closer together, as I believe happened during the conference.”

Tim Nafziger, another trainer, echoed those thoughts. “A powerful synergy for this training was the way we were both able to train in fierce vulnerability and practice it at the same time. As in many communities, there were elephants in the room during our time together from ongoing conflict. Participants were able to discuss the dynamics around that conflict and the facilitators came together to support that work.”

As Malidoma Some once wrote, “conflict is the spirit of the relationship asking itself to deepen.” Through this conflict, and the tears and difficult conversations that it led to, we were all able to deepen in relationship.

I’ll close with a quote from Sierra Pickett, East Point board member and also a trainer during the weekend. “Participating in this work shows me how possible and fun, difficult and beautiful transformation can be. It cannot only happen but it can happen within those of us who are uncertain. This was a once in a lifetime, magical experience where I also created family along the way, people with whom I can cultivate community, face unjust systems and simply explore what it means to be human. This weekend truly gave me hope.”

Check out more pictures from the weekend here and here. 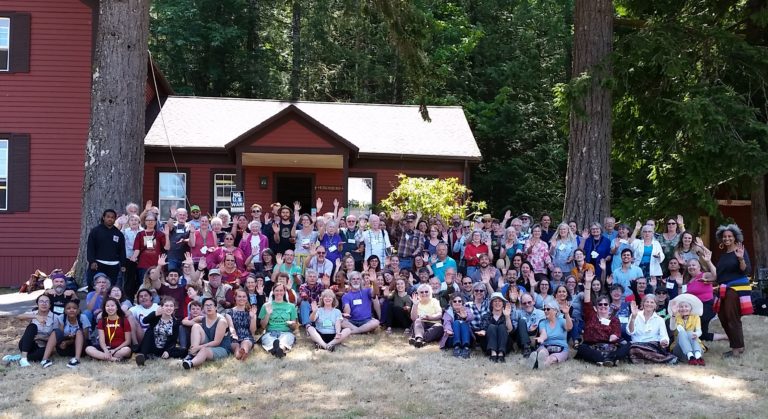