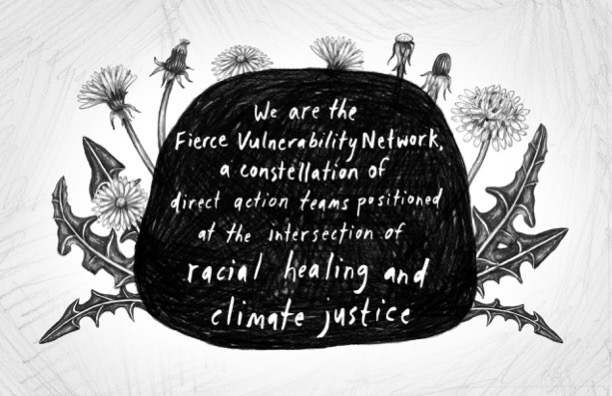 The Fierce Vulnerability Network is a decentralized constellation of direct action teams positioned at the intersection of racial healing and climate justice. It is a collaborative effort between multiple organizations and individuals spread throughout the United States, of which East Point Peace Academy is just one.

We envision these teams - of approximately 3-8 people each - to be comprised of people who deeply resonate with the content of the network’s zine, and who feel called and are prepared to uphold the principles and practices (aka “the DNA”) outlined in the network’s soon-to-be-completed handbook. We envision that each team in the network will be surrounded, accompanied and upheld by a wider community of support, comprised of folks who resonate with the spirit and goals of the network but who for whatever reasons don’t feel called to or aren’t ready for the commitment of team membership. 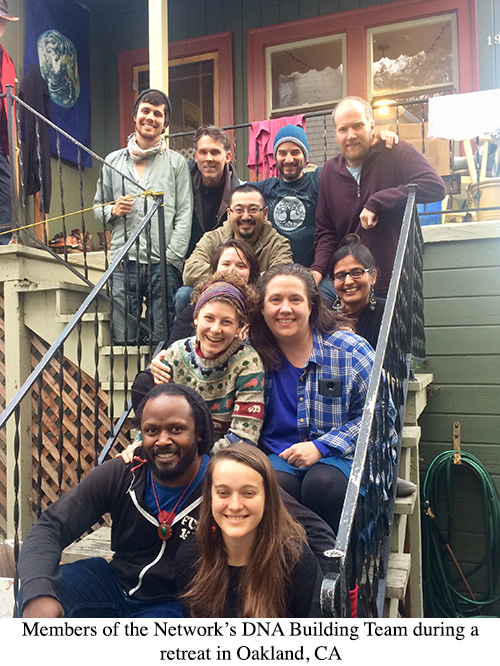 Each team in the network will be autonomous and self-governing. This means that each team determines how they do the work to define and achieve their unique goals within the context of the network’s DNA. Each team will co-hold and co-implement its commitment to engaging in direct action at the intersection of climate justice and racial healing, and to redistributing and/or facilitating the redistribution of resources as a concrete expression of reparations for the impacts of colonization and white supremacy. Obviously the racial makeup of teams will significantly determine the particular ways that teams engage with the network’s core goal of “making reparations real.”

Our twin purpose of engaging in direct action and reparations is but one way – the way to which we feel collectively called – to combat the patriarchal domination system we are embedded in. We celebrate that we’re part of a huge and diverse movement ecosystem, within which others feel called to and are carrying forward other essential work that we’re not undertaking.

After onboarding into the network, teams will be strongly encouraged to follow up with periodic enhancement trainings to strengthen their capacity in a wide range of areas, ranging from group process to direct action strategy to grief-tending to regulating our nervous systems. Teams, which will be made up of a minimum of three people, will be mini-communities of co-creation, shared accountability, and deep trust-building. The network will be counting on our first cohort of teams to beta-test the network DNA through hands-on experimentation, and to offer the feedback we need to strengthen the DNA as our collective experiment unfolds.

This Network will not be for everybody. This Network will be for those committed to the concepts of integral nonviolence - deep inner healing and trauma work (personal transformation), building the alternative systems and institutions our communities need to thrive (constructive program), and radical, loving and bold direct action (satyagraha). We will be asking significant commitments from those who join Network teams, though we will welcome anyone who feels called to this work to be part of the larger "village" of supporters.

The commitment begins by participating in a two-phase onboarding training process. This will begin with a two-day Fierce Vulnerability workshop to better understand the spirit of the Network, followed by a three-day DNA training where participants will learn the principles and practices of the Network.

Please see our calendar for a list of upcoming trainings, or reach out to us with any more questions.

Click here to learn more about onboarding into the Network.

We also encourage you to check out some of our allied organizations also working to build this Network around the country.