Leap and the Net Appears: Our Continuing Journey with Gift Economics 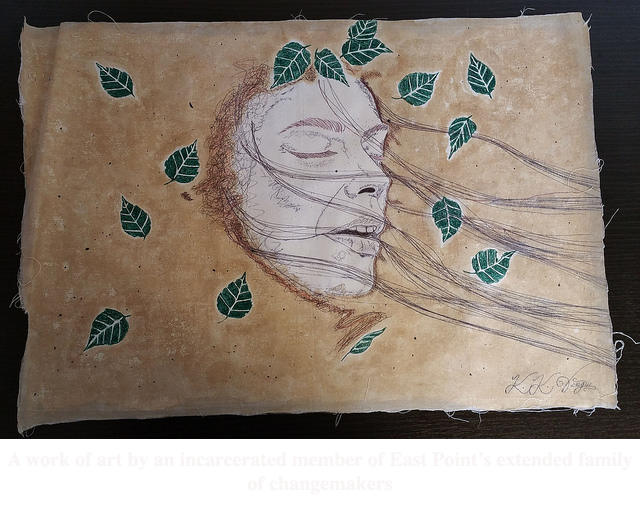 East Point Peace Academy’s commitment to gift economics often elicits praise from workshop participants and others we work with. Our organization’s refusal to place a price tag on our offerings, which would invariably exclude people, is experienced as a breath of fresh air by many who are uninspired, if not dismayed, if not furious, with the unjust impacts of winner-loser capitalism.

In the spirit of another key commitment here at East Point – the commitment to transparency – however, I want to confess that every couple months or so, Kazu or I admit out loud to one another that we’re worried about the organization’s finances. To put it simply, our commitment to Gift Economics sometimes really stresses us out. The worry usually comes after a workshop where our basic costs weren’t met by the contributions of those who attended, or during a week when an unexpected number of monthly donors decide they need to discontinue their giving for a while. Sometimes the worry or stress comes when one of the very few grant proposals we send out is rejected, for no apparent particular reason.

These moments are important for us personally and organizationally. They bring us back to the core of our commitment to the Gift Economics model, which is faith. We operate on faith that if the work we’re doing is of true benefit to our community, our community will come together to sustain it. The presence, or absence, of that sustaining support represents vital feedback about the way our community views the contribution we’re making in the world.

At the end of 2018 Kazu sent word to the wider East Point community that we were quickly heading towards a $20,000 loss for the year. This was definitely one of those moments when we were feeling the weight of our Gift Economics commitment and the woozy feeling that often comes after a leap of faith. The community response to the simple year-end plea that Kazu shared was amazing. At the end of January, when all the numbers were in and all the pledges tallied, we had actually surpassed, by a few hundred dollars, our fundraising goal of $20,000! Contributions ranging from $5 to $5000 brought us to financial equilibrium at the beginning of 2019.

This gives us renewed confidence in our plan for the year, which is already off to an amazing start. This week East Point will launch a new Kingian Nonviolence training series in San Quentin Prison, to be facilitated by our newly trained team of inmate facilitators. We’re developing a new restorative justice program to be launched this Spring in Soledad State Prison. Our newest workshop offering, Fierce Vulnerability, continues to fill up faster than any previous workshop, and the groundwork is now being laid for a fierce vulnerability-inspired direct action program, which is being developed in tandem with a national network of direct action teams that East Point is helping design and launch. All this and much more is made possible by all those who continue to meet our faith with the assurance that East Point’s work matters. Sometimes this assurance comes in the form of financial support, sometimes it comes as a word of appreciation, sometimes as occasional hands-on volunteering, sometimes as serious involvement in carrying out East Point’s work and vision, as a trainer, board member, key advisor, or (soon) direct action teammate.

We’re grateful and humbled by these expressions of support and solidarity. And we’ll do our best to remember them the next time the stress and worry settles in! It makes sense that forging new ground brings up feelings of uncertainty and doubt. Our habits as members of a consumerist, materialist society are hard to break. But little by little that’s what we’re doing, together.