We’re thrilled that our announcement of East Point’s first “Fierce Vulnerability” workshop is being met with great enthusiasm. In just a few days over 40 people have signed up for the two-day workshop. The theme of Fierce Vulnerability, rooted in the desire to build a heart-centered movement of healing and transformation, is clearly speaking to a deep longing in many changemakers. Never before has registration moved so quickly for an East Point offering. 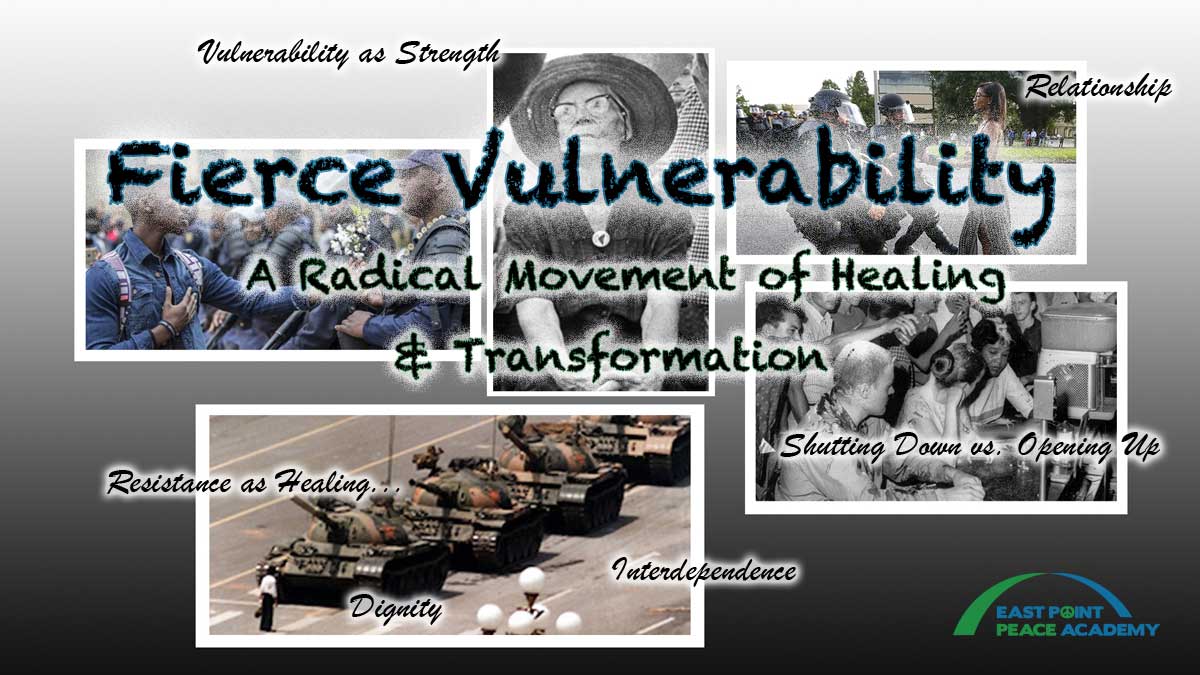 Our announcement of the Fierce Vulnerability workshop coincided with the release of a new zine describing a very complementary project I’ve had the privilege to work on for the past several months: an emerging yet-to-be-named national network of direct action teams positioned at the intersection of racial healing and climate justice, rooted firmly in the principle of Fierce Vulnerability. The zine was produced as a promotional tool for the first trainings for prospective members of this new direct action network, which will be held this coming December here in the Bay Area. (One of these trainings will be held right here at the Oakland Peace Center!)

Just over a year ago, when Kazu and I first began discussing the possibility of my joining the staff at East Point, we were quick to notice the confluence of many aspects of our work and analysis. Two synchronicities struck us with particular umph: the first, our separate but simultaneous re-imagining of a nonviolence framework and narrative for this specific moment in history. This re-imagining, which many other changemakers are also engaged in, appears to be taking shape under this mysterious, powerful, and emergent banner of “Fierce Vulnerability”. And the second synchronicity: our shared sense that a critical mass of serious nonviolence (read “fierce vulnerability”) practitioners are longing to join together in direct action teams in order to put into concrete practice the philosophy and skills that have been at the heart of East Point’s trainings these past five years.

We’re hoping that November’s Fierce Vulnerability workshop will serve as a launching pad for a new and seriously exciting East Point program, an East Point Direct Action Team (and/or eventually multiple East Point Direct Action Teams knit together by shared ideals, practices, and friendships). We hope that many of the participants in the November workshop, and in future Fierce Vulnerability offerings (we’ve already scheduled three more for 2019!), will join with one another to form teams, with East Point serving as a hub for ongoing trainings, organizing, relationship-deepening, and direct action deployment. A further hope is that some (all??) of these teams will feel called to affiliate with the previously mentioned national network that’s now gearing up for launch. Participants in the November Fierce Vulnerability workshop who are interested in exploring this possibility can reach out to me ([email protected]) to learn more.

Synchronicity, unforced and undeniable, is so often a sure sign that something really good is taking shape, that life is on the move, that a new threshold is about to be crossed. We stand ready to take life’s lead, in service to healing and justice.