Important Update re: Bay Area Yet To Be Named Network

We hope that this message finds you and all of your loved ones in good health. We are writing an important update about the Bay Area regional organizing of the Yet-To-Be-Named Network. If you have been, or are wanting to be involved in the Network, please read this message.

We have decided to postpone our next monthly gathering by one-week.

As you know, the YTBN Network is committed to working at the intersection of climate justice and racial healing. And in accordance with our commitment to Fierce Vulnerability, we need to be transparent with you about our process even if it may be challenging or vulnerable to share. 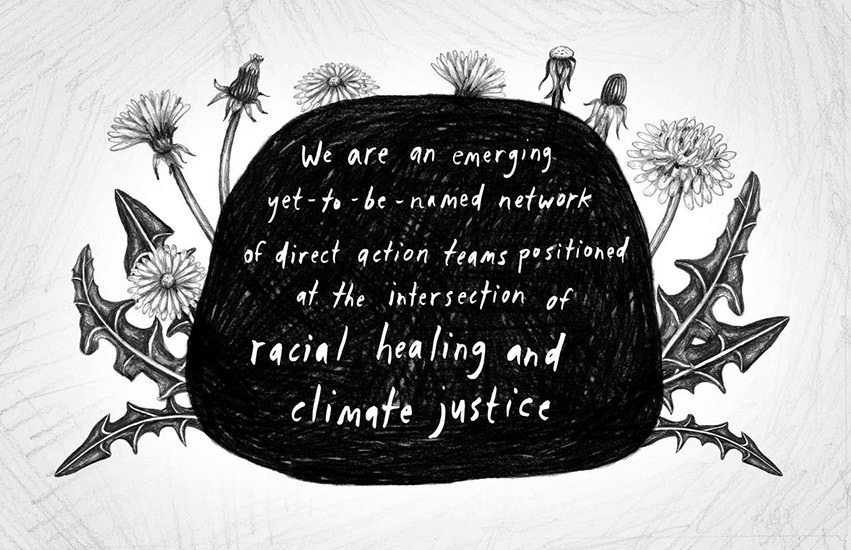 As we stated in our zine (attached here, the statement is on page 32), the Network was founded initially by a largely white community of activists committed to climate action and racial reparations. Partially as a result of this, the makeup of the core community who have been leaning into the design of this Network has also been largely white. This has been an ongoing struggle for those of us in the Network – including the People of Color (POC) who have been at the center of this work.

As we move closer to launching the Network and building teams, we have noticed that some of our larger gatherings in the Bay Area have not represented the diversity of this region. While we have made efforts to address that – including ensuring that at least 50% of participants in our Fierce Vulnerability workshops have been POC – we have also had to be honest about our ongoing mourning of the lack of visibility of some members of our community, particularly Black and Indigenous folks.

We know that the dominant culture of white supremacy is pervasive. Without taking proactive steps to combat it, having the intention of equity, diversity and sharing of power is not enough.  As we sat down to plan the upcoming monthly gathering we quickly realized two things. The first was the need to grapple honestly together about the lack of racial representation in our gatherings. The second was that this should be a process centered on hearing from you, the Bay Area YTBN community.

When we come together on May 1st, we will join our entire community in some welcoming, grounding and framing, then we will go into caucuses of those who identify as white, and those who identify as POC. In those separate groups, we will reflect, share and offer feedback to this process which we hope will help guide our next steps as part of the YTBN network. .

We are also making this event only for those who A) are based  in the San Francisco Bay Area, and B) have been or have interest in being involved in the YTBN Network.

We know that some who may want to offer feedback into this process may not be able to join us at our next gathering. If that is the case, we invite everyone to fill out this online feedback form, so everyone’s valuable input can be added into the mix

We are so honored to be in this process with each of you. May it lead to deeper understanding and transformative next steps!