Shadow And Transformation: Do it out of Love, not Guilt (2/2) 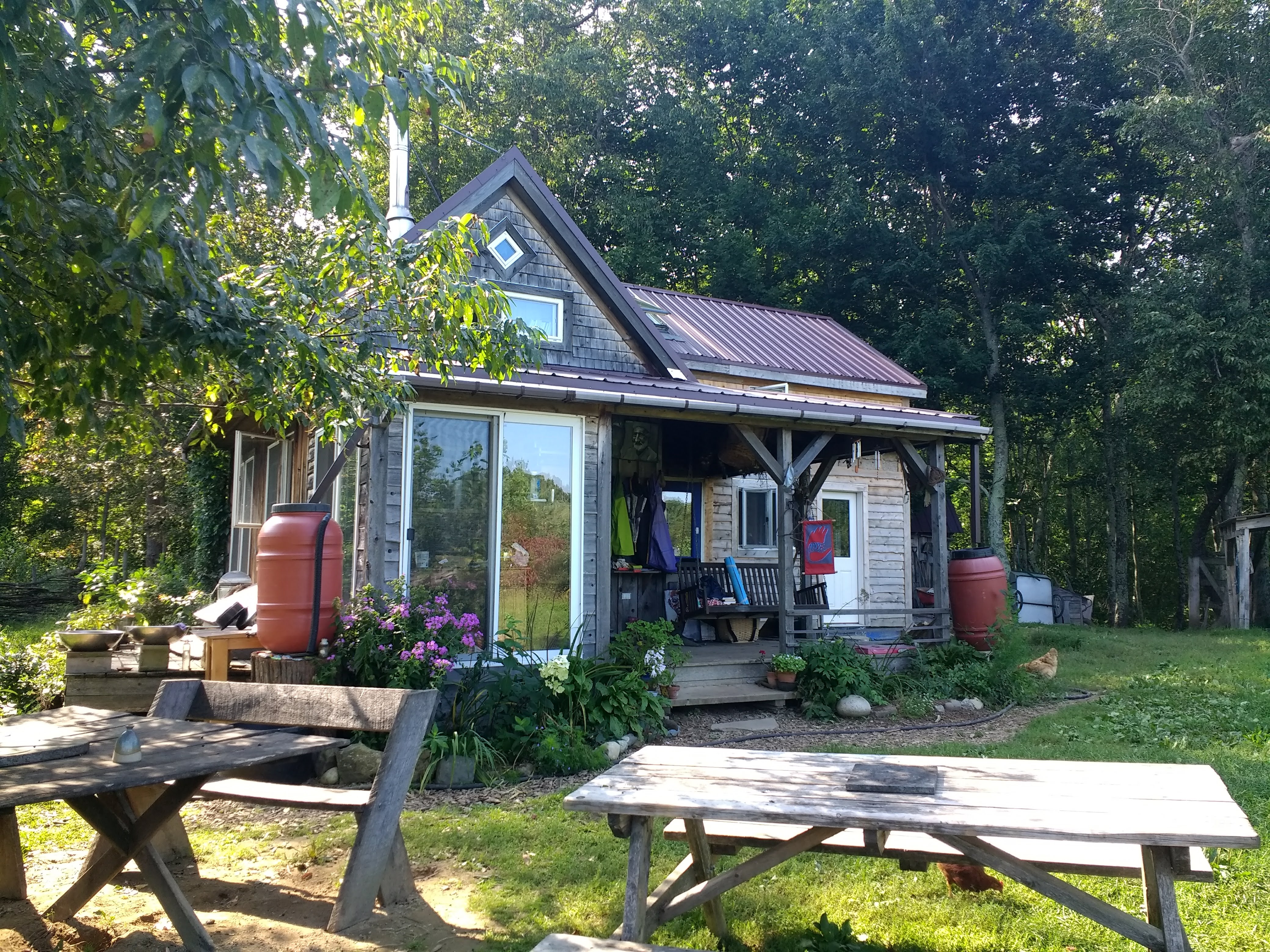 At first, donating to Black and Indigenous-led projects any money saved from not going out to eat nor buying carbon and slavery-hungry treats felt like mission impossible. Seriously. That is what I started doing, however, after Ethan from the Possibility Alliance suggested it a week after my encounter in Boston (see this post for context). “Do it out of love for Nature and Life,” he said. “Not out of guilt.” His words struck me, and the same night he and I talked, I dedicated one full page of my diary to the tracking of my Life-honoring donations to initiatives that I believe in.

A week later, in the train that took me down from the Possibility Alliance (picture above) to Vine & Fig on Manahoac Territory, VA, I stared into my wallet and wondered - how am I going to do this? My whole life needed to change. And that was both exciting and INCREDIBLY scary.

Being called out in Boston’s streets had not only cracked my heart opened to the truth that parts of me clearly didn’t care about the poor… spending two weeks on a self-sustaining farm with four goats, a garden, and twenty chickens that existed beautifully without electricity, internet, and running water had also shown me why.

A distinct spark of soulful hope scintillated in my large brown eyes reflected on the bus window, surrounded by Maine’s silver lakes. As I looked closer to my own face, I saw in my own gaze a quiet determination to curve my addiction to systemic oppression. The things I knew I was going to have to work with were day-to-day luxuries - avocadoes and chocolate; added sugars; computers and smartphones; social media; convenient to-go food; and all sorts of behaviors aimed to “be nice to myself and others” - and belong - survive even - in a culture that is ever-more reliant on carbon and exploitation for perennity.

Whizzing towards Boston, passing through small countryside towns, I was feeling my emotional heart open and close inside of me - a subtle movement of longing ascending and disappearing with the magnetism of my thoughts and the charge of my emotions.

Holding the subtle tension of my heart’s open doors was delicate work, I was conscious of that. This trembling, this back and forth had me wonder how much I would actually be able to reduce my participation in mainstream systems once away from the Possibility Alliance.

Cities are not made for humans - they are made for consumers. Mainstream culture’s priority is not human feelings - it’s financial flow. And consumption in cities requires at least a certain degree of disconnection, which is toxic to the soul. I wondered if I would be able to somewhat extract myself from this system. And if I did... how long would it last?

“We’ll take it day by day,” I started reasoning as the hours passed by and my body sunk heavier and heavier in the bus’s worn-out seat. “And see what happens.” A game plan slowly emerged as my fingers sent dozens of voice messages to my WhatsApp contacts, aided by Megabus’ unreliable Wi-Fi. These messages were telling my loved ones many tales and wonders about my stay at the Possibility Alliance - and letting them know that I was deleting WhatsApp. 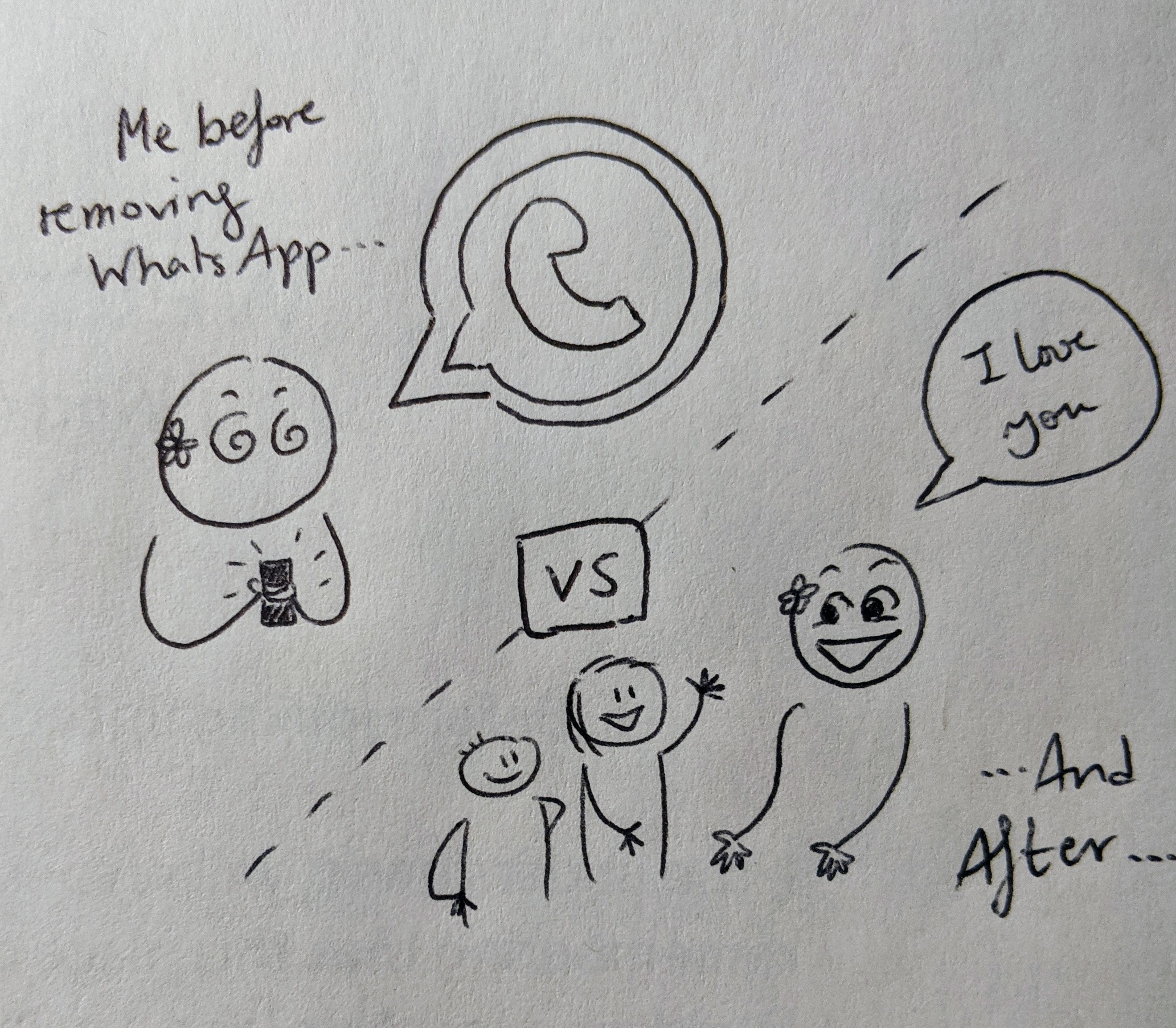 My relationship to WhatsApp had always been a struggle. Owned by Facebook, a known funder of addictive technology, WhatsApp distracted me and fed the neurons in my brain that hated feeling pain - the world’s pain, my pain - a pain that was just too hard to feel without a grounded mind-body. I told my loved ones I would contact them in other ways - Signal, Skype, texting, letters - and asked for their mailing address and birthdate to send them cards. WhatsApp was out.

"Love is most easily nurtured when we slow down
and remove everything that can get in the way of two human beings
or a human being and Nature
interacting."
― Ethan Hughes - Back to Life: Returning from the Virtual to the Real

The thought of concentration as my safety buoy comforted me. I remembered how this intention to concentrate helped me during past multiple-day meditation retreats. Focusing my attention on each very moment directed my attention away from the whisper in my head which repeated that a million other similarly hard moments spent in silence were waiting ahead of me.

That thought, when I gave it attention instead of concentrating on what was in front of me, would usually provoke a cascade of anxiety and panic, which would then open my body’s doors to dysregulation, despair, and frustration - and the desire to give up. It was a rabbit hole that I respected but did not need to feed on this path. I wanted this rabbit hole to only remind me how unpleasant panic felt when it knocked at the door of my skin. 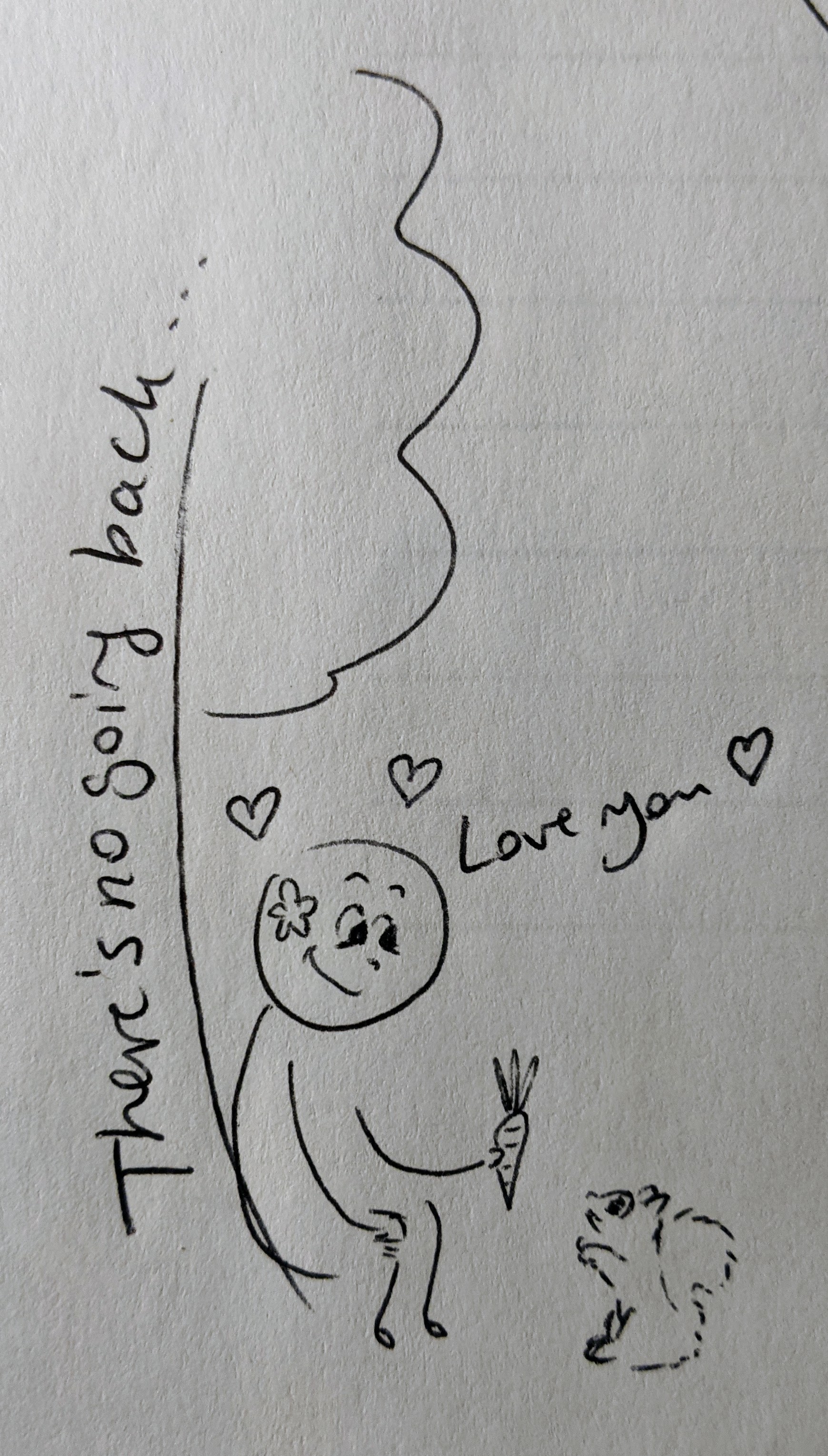 “I know how to do this. I’ve practiced this,” I thought. “And if I stray away, well, I’ve practiced falling away from my meditation practice, too, and coming back to it for almost six years now. I know that Love is the action of coming back again and again, regardless of how many times I stray away. I got this.” From this inner dialogue, I realized that upholding my love for Life through concrete actions was going to be like… well, like being on retreat all the time. And it was exciting, too.

Sitting under a tree in Boston, waiting for my next train, I continued pondering while handing to a squirrel a piece of organic, local carrot from Belfast’s coop. “At some point, all the isolated moments will make a string of moments. And then the strings of moments will make weeks - and years.  I love this world too much; I cannot go back to my old ways. My eyes and heart are opened now. Closing them would be a crime. Ignorance that is unaware of itself can be a good excuse - but intentionally repressed awareness never can.”

So, day by day, over the past three weeks, I have been grappling with fear, excitement, pride, grief, joy, disgust, frustration, love - and everything in between - while trying to feed myself and simply exist in a culture captive of its own dependency on carbon and exploitation. 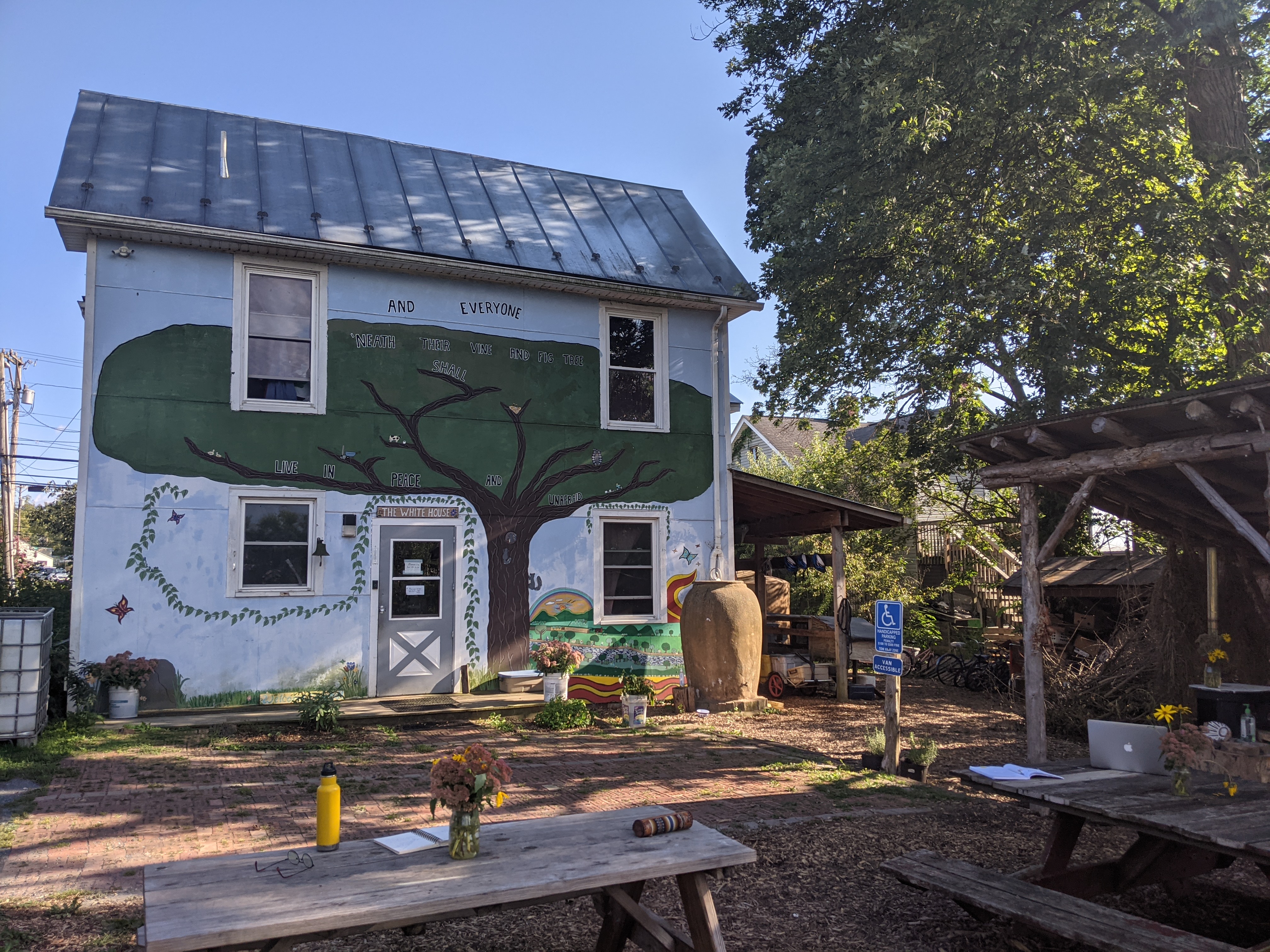 One of the first things I did after arriving at Vine & Fig (see photo) on Manahoac Territory in Harrisonburg, VA, was locate the city’s Coop and buy a soap and shampoo bar made with tea grown within the confines of the state. Not buying chocolate has been the most challenging aspect of my resolution so far. Chocolate is often produced through human exploitation in so-called developing countries and shipped internationally with great costs for one’s carbon and slavery footprint balance.

My fuel to sustain the momentum has sometimes been the warm feelings that my body gets while awe arises to the sight of leaves moving in the wind; sometimes the determination that every fiber of my being can master to hold onto; and sometimes the grief fed by moments like when Harrisonburg’s whole sky filled with smoke from the California fires mid-September.

Ethan’s words also continue to live with me “Do things out of love. Not out of guilt.” Guilt is a powerful, habitual fuel for me. Unsurprisingly, it sometimes arises big time when I stare at chocolate in the store. “Don’t buy this. You shouldn’t do this,” I hear Guilt whisper. Guilt’s footprint in my body is acidic, it constricts my chest and makes me look away from the shelf too quickly.

I am starting to recognize Guilt more and more. When Guilt is here, I direct my attention to the part of my body that is screaming and let this scream-feeling permeate my whole body. Guilt is Energy, it’s Power. “I choose the Power of Love today, over the Power of Guilt,” I tell myself. Slowly, I let Guilt move on and shape-shift. I start walking more slowly. I shake my limbs or breathe a little faster to dissipate the physical tension. I search inside of myself for this part of me that so wildly loves Nature and Justice. I remember the fallen trees in Suomi Finland, I remember the lush green redwood trees on Pomo Land, Mendocino. And I leave the store without chocolate.

“I could not have done this without you,” I said to Ethan later on. “There is nothing that we can truly do alone,” he replied. 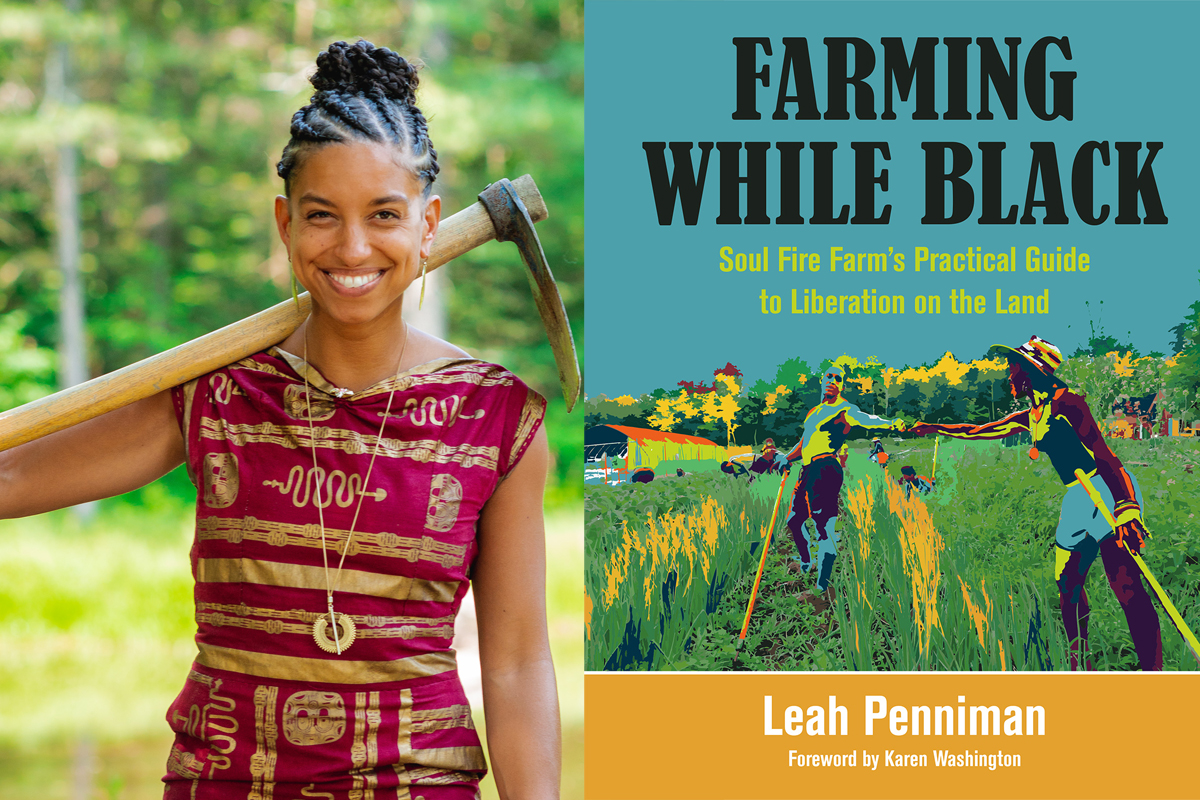 Since the day of my 26th birthday on August 14th in Boston, $18 has already gone from my wallet to Soul Fire Farm, “an Afro-Indigenous centered community farm committed to uprooting racism and seeding sovereignty in the food system.” I feel more connected with my life purpose these days - and it’s been fun to have friends over instead of going out. Early September, two friends brought home-made food and home-grown veggies, and we had the sweetest time eating together while watching the sunset above Vine and Fig’s Garden.

The work that I am called into, I realize, is to let my love for the world transform my indirect dependence on systems of oppression into direct interdependence with other living and non-living beings.

" Love is most easily nurtured when we slow down
and remove everything that can get in the way
of two human beings or a human being and Nature
interacting."
― Ethan Hughes - Back to Life: Returning from the Virtual to the Real